4 Ingredients to Avoid in Your Grooming Products

I can remember standing in the shower as a young, budding wordsmith, trying with unfrustrated determination to pronounce aloud all the ingredients listed on a bottle of White Rain Shampoo. If I made a mistake, I would start all over until I was able to make it through the entire list. I don't know whether I ever actually did it. The multi-syllabic chemical compounds posed an exciting challenge and probably contributed to my impeccable diction. But I'm not sure White Rain's "billows of creamy suds" ever did anything to improve the texture of my virgin hair.
Inspired by the memory of those roller-coaster words like cyclohexenecarboxaldehyde, methylisothiazolinone and dodeclybenzenesulfonate, I thought I'd take a moment to advise you against certain ingredients that, according to some, DO NOT belong in your grooming products. From pore cloggers to carcinogens, here's a list of ingredients to avoid:
1. Propylene Glycol. The relatively benign sound of its abbreviation "PG" might sound like it's safe for kids. But this toxin found in airplane de-icers, paints and engine coolants is also known to turn up in processed foods, ingested & injected medications and topical skin treatments like lotions and soaps. Granted, the amounts and concentrations of PG vary depending upon its use, but nevertheless, the FDA is pretty clear about the consequences of overdose, which include acute tubular necrosis, nephrotoxicity and allergic contact dermatitis.
2. Parabens. Unregulated by the FDA, but used as preservatives in cosmetics, lotions, deodorants and cleansers to prevent microbial growth, butyl- and propylparaben happen to be illegal in Denmark. Parabens have been found in biospies of breast tumors at relatively the same concentrations found in consumer products. And if that doen't spook you, try this one: it's also found in nearly all urine samples from U.S. adults regardless of socioeconomic, ethnic and geographic backgrounds.
3. Phthalates. Don't ask me how to pronounce this one. I suppose it's the chemical whose name dare not be spoken. This class of chemicals, known as plasticizers, is used to soften plastics making them more pliable and less breakable. They're also known disruptors of human hormone levels. Their screwing around with our endocrine systems can lead to low sperm count, poor sperm quality and impede boys' genital development. (cue the horror house screams.) Pthlates have been banned in children's toys since 2009 but still turn up in fragrances, hair sprays and nail polishes. On labels, their listed as DEP, DBP and DMP.
4. Formaldehyde. That's the stuff in the jars with the conjoined fetuses at Ripley's, right? Well it's also used in "preservative systems" in cosmetics, and it's a known human carcinogen. Most of the cosmetics companies who use formaldehyde don't put the stuff directly into their recipes. If they do, it's only in tiny amounts. Instead, they cleverly include chemicals known as "formaldehyde releasers," which go on to produce formaldehyde on their own. On labels, look for DMDM hydantoin, Quaternium-15, Diazolidinyl urea, Imidazolidinyl urea, Bronopol, Hydroxymethylglyconate, among several others.
It won't surprise you to learn that Brooklyn Grooming uses none of these. In fact, in our products, you'll only find organic, natural vegetable glycerins and butters and healthful essential oils working in symphony to keep you looking and feeling your best.
Stay Handsome!
Jan 29, 2014
Like Tweet Pin it Fancy Email
Previous Post
Next Post

I will keep this short;

I was wondering if you could recommend a list of shampoos and conditioners and other products to go along with your products. After that last post I feel I need to rethink my chose of hair/face products.
I do use your beard oil and love it! My wife got it for me for Christmas.
Thanks Justin

Let customers speak for us

Day one my cat climbs up on my chest and smells my beard. This began 10 minutes of purring and nose boops. Win.

Love this facial serum! It absorbs so fast and leaves my skin feeling nourished and moisturized for the day. Added bonus: it smells so good!

Haven't received this item yet. Will submit review in time. Unable to track parcel.

I’ve tried many brands & products made for beard grooming over the years, but I always find myself coming back to Brooklyn Grooming. Nothing compares to their formulas, their scents & their quality. Red Hook is my favorite scent in the line of products, but you really can’t go wrong with any of the others. Also, AMAZING customer service. 10/10. 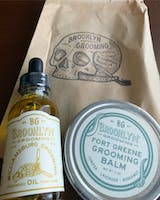 The product has been constantly great. I miss the unique art sent with each delivery.